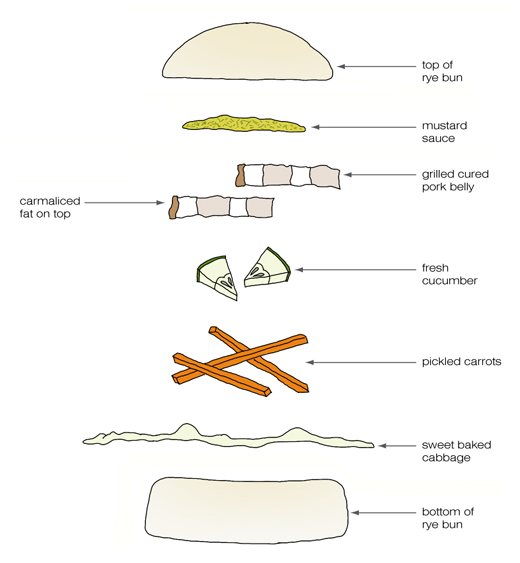 Ever since I had my first Pork Belly Bun at Momofuku’s Noodle bar in the East Village I have never had enough of them. Their Pork Belly is cured with spices like star anise, fennel, coriander and cinnamon etc. The pork is served on steamed buns with cucumber, fresh coriander and Housin sauce. To cure fatty pork  is an old tradition and common all over the world and it’s a good way to conserve the meat. In Sweden they call it söt-saltat fläsk (sweet-salted pork belly).

The first time I cured pork belly I followed Stephane Lemagnen’s excellent recipe. Stephane even claims that his pork belly buns are better than Momofuku’s. Later I developed my own versions and a couple of weeks ago I had some friends over for a Nordic-style pork bun. I spiced the pork with coriander, fennel and caraway seeds (the same spices that are used in Akvavit). Instead of steamed buns and Housin sauce I served them in rye bread buns* with sweet baked cabbage (see recipe below), fresh cucumber, pickled carrots, and mustard thyme sauce (see recipe below). Everyone loved it!

Toast black pepper, coriander, fennel and caraway seeds in a dry pan until they start to pop. Remove immediately from heat and pour into a mortar and pestle. Crush them as fine as you want. Mix the spices together with the salt, sugar and garlic.

Score the fat of the pork and start to rub in the spice mixture on all sides. Place the meat in a dish or a bowl and pour, if any left, the rest of the spice mixture over. Cover with plastic wrap and place something heavy on top. Let it cure for 48 hours (24 hours with thinner pieces). Turn the meat around now and again.

After 24 – 48 hours, brush off the spices and rinse under cold water. Place the meat in a pot together with the broth ingredients. Bring to a boil, lower the heat and simmer for 2-3 hours. Skim off the fat that floats to the surface. The meat should feel soft when you stuck with a fork. When done let the meat cool in the liquid. The liquid can be used in soups (like this). Slice the meat into ¼” (about 5 mm) slices. Place them with the fat side up in a baking pan and grill them in the oven on high heat until the fat is caramelized. Serve immediately together with rye bread and accompaniments listed above. Enjoy!

This mustard sauce is like a traditional Hovmästarsauce (butler sauce) that is often served with Gravlax. Instead of dill I used fresh thyme from the garden.

Mix mustard, egg yolk, vinegar and thyme. You can skip sugar if the mustard is too sweet. Slowly start dripping in the oil while stirring the mixture. Continue dripping in the oil and stirring. If you add the oil too quickly the mixture can separate. The result should be a thick sauce. Season with salt and fresh ground pepper. (If the mixture separates start over with a new egg yolk and slowly add the separated mixture.)

Clean and cut one head of white cabbage into wedges. Brush the wedges with a mixture of lemon, olive oil and sugar. Season with salt and pepper on top. Bake At 400ºF (200ºC) on one side for about 15 minutes or until it starts to brown. Turn around and bake for another 10-15 minutes.

* I really need to create a better bread post where I describe how I measure flour and why my breads always change depending on what I have in my pantry and fridge. Until then my older rye bread recipe will do. Instead of two loaves make several mini buns.