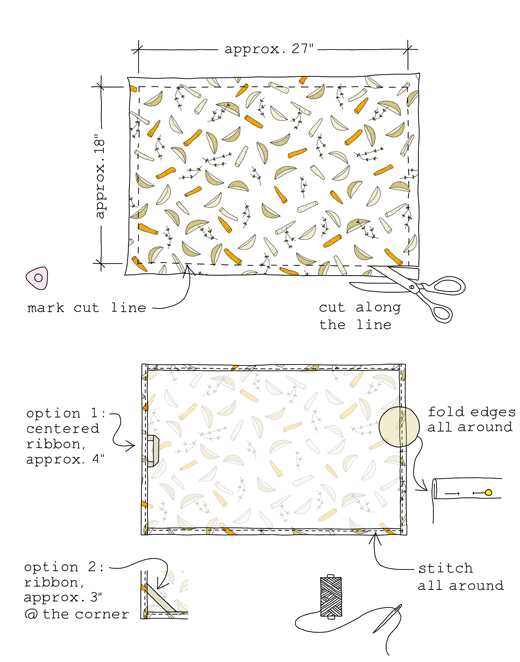 I have an announcement to make… I have set up a shop at SpoonFlower where I’m selling patterns for fabrics and gift wraps etc.

Some of the patterns are specially designed to make one single tea towel (see above) by selecting the Fat Quarter size (27″x18″) and their Linen-Cotton Canvas fabric. This fabric is also a perfect match for tablecloths, napkins, aprons, bags* etc. There are of course plenty of other options.

Soon there will be more patterns in the shop. For example I have been working on some flower patterns and as soon I have proofed the samples I will put them up for sale.

I hope you enjoy them. 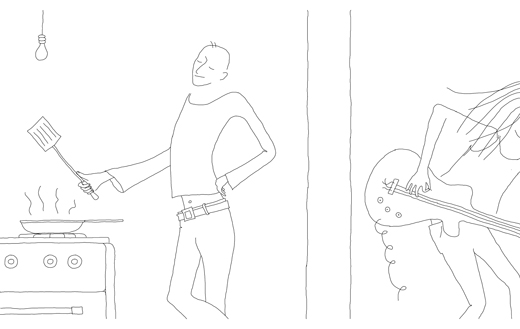 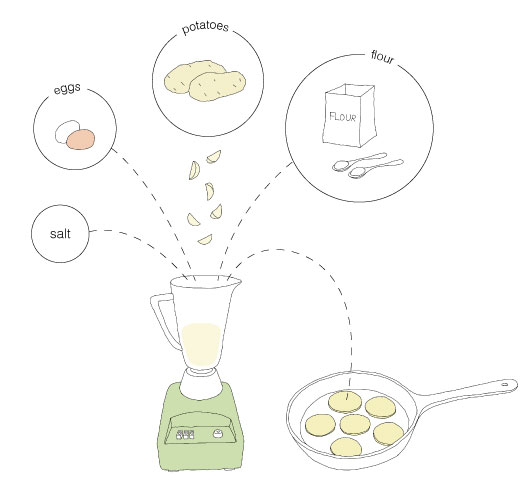 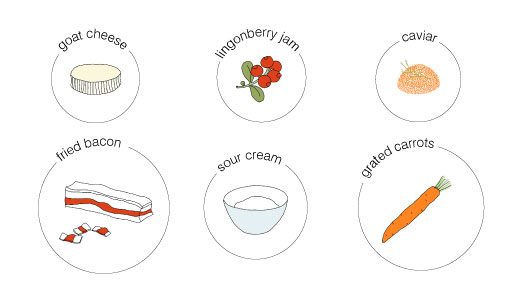 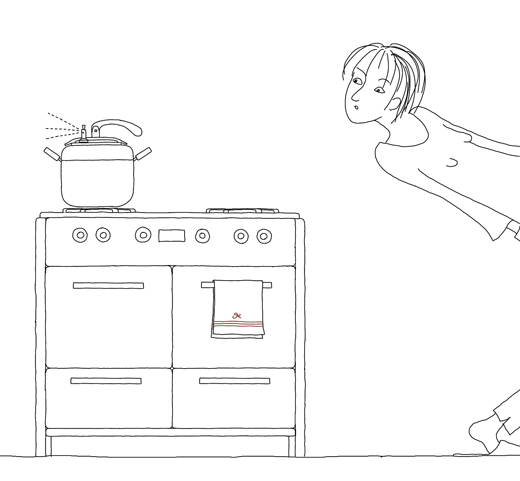 I feel more and more secure about using our pressure cooker even if I sometimes still think its going to explode. In this dish it may look like it actually happened, as it’s not a particularity attractive meal! However this hearty stew is perfect for lazy evenings when its freezing cold outside. It’s warm and delicious and shamelessly easy to make…

Cut the bacon into thin slices and fry in a pan on medium heat until it starts to get a little crisp. Chop the onions and sauté in butter or with remaining bacon fat on very low heat until soft and almost transparent. At the end add some thyme (if using dried). Place onion, bacon, split peas (rinsed), chopped potato and parsnip in the pressure cooker. Add stock, bay leaves and press in some garlic. (If necessary season w/ salt and pepper). Stir everything and bring the mixture to a boil. Close the lid and bring pressure to high until the steamer begins to steam. Lower the heat and continue cooking for 15 minutes. Remove the cooker from heat and let cool. When the pressure has completely gone open the lid.

Serve the stew with a nice ale.

We use both yellow or green spit peas for this dish. However I have noticed that the yellow split peas gets mushier and at the same time drier. Therefore I cook them for only 13 minutes and use just a little bit more stock. You can also use other vegetables such as: turnip, carrot and celery. This recipe came originally from a soup recipe at cd kitchen. 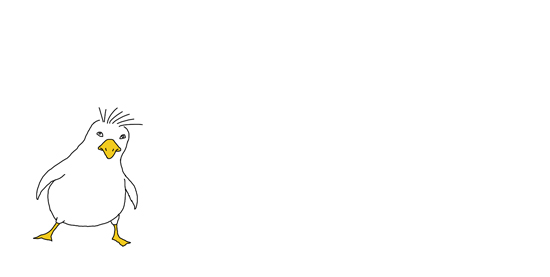 So we had duck this thanksgiving and I am really happy with how this recipe turned out.

duck neck and giblets
one small onion, sliced
one small carrot, sliced
small piece of celery (or what ever you have at hand)
½ cup dry vermouth or white wine
sage
6 black pepper corns
salt
water

The day before: Cut the figs and prunes into small pieces and soak them with dry vermouth overnight or at least for 6 hours.

About an hour before you roast the duck you need to prepare the stock. Take out the giblets and the neck from the duck. Sauté the giblets in a saucepan. When brown add the sliced onion, carrots and pour in the vermouth. Let it bubble and reduce for a couple minutes. Add thyme, sage and some salt. Cover with water and let simmer for about an hour. Taste and season with salt if necessary.

Just before you are ready to stuff the duck, chop the pear in small pieces. Add the pear and thyme to soaked fruit and blend together carefully. Wash the bird under running water. Rub the duck inside and out with lime. Rub on some salt and pepper. Fill the duck with the stuffing.

Put the duck on its side on a rack in a roasting pan. After 30 minutes in the oven @345°F(175°C), turn the bird on the other side and pour 1/2 – one cup of warm stock over the bird. Let it cook for another 30 minutes. Turn the bird facing up and place the potatoes and parsnips at the bottom of the pan. If you think there is too much fat at the bottom of the pan, you may take some out. However I really recommend keeping the fat for another occasion as it’s  fabulous to fry potatoes in.  Put the bird back into the oven and cook for about 45-60 minutes. The breast should be gorgeously brown and the legs loose. Take out the bird and let it rest for a about 15-20 minutes before carving.
Serve the duck and baked potatoes/ parsnips with the prune and fig stuffing, gravy, gherkins and cranberry sauce. 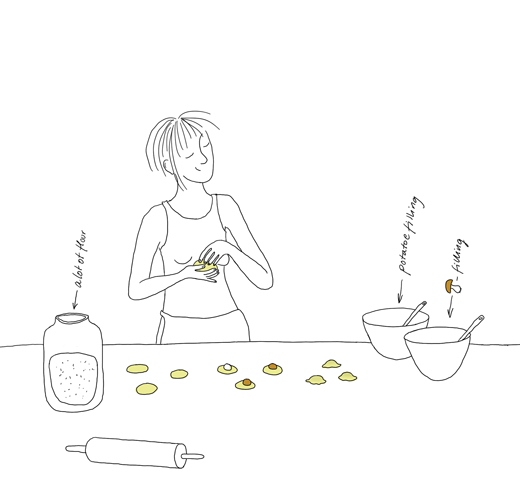 In Manhattan it’s hard to find great pierogi. I often find them too thick and heavy. Well M:s mother happens to be a great pierogi maker. She makes them so thin and light and fills them with sauerkraut and mushrooms, meat, or cheese and potatoes. I easily end up licking the plate. After all she is from Poland and as lovely as she is, she makes tons of them when we are around.
This summer I asked her for her dough secret. I was hoping to get the whole recipe written down, but her answer and recommendation was very short, “make them with warm water”!

Mix the flour and the salt together with the eggs. Heat up some water and mix small parts at a time into the flour mixture. I did it by hand but I think it works perfectly well to use a food processor. On a flat surface knead the dough until it’s firm and soft. Cover with a damp tablecloth and let it rest on the counter top while you are making the fillings.

mushroom filling
Here I made M:s Spicy Portobello Mushrooms. I used less water, as I didn’t want the filling to be too loose. Instead I used some cream to make it thicker.

Mash the potatoes with the egg white, some melted butter and milk. Add the farmers cheese as noted or to your own taste. Mix well and season with salt and pepper. Lastly add chopped cilantro. Note that cilantro is not really a traditional ingredient for a pierogi filling but I don’t think there are any strong rules on how to make fillings. You take what you have at home. I used a very mild type of cilantro. However many recipes seem to use fine chopped onions or chives. I will try garlic next time.

filling the pierogi
Uncover the dough and if necessary knead it some more. Divide into 4 pieces. Use lots and lots of flour while rolling one piece at the time to a 1/16” (1 mm) thickness. Make 3” circles and divide the fillings on top. Cover the filling and pinch the edges firmly to seal. Pat some more flower on every pirogi so they don’t stick together. If necessary add some more warm water to the dough as the flour makes it dryer in the process. Repeat until you have about 75 lovely pierogi.

Heat up salted water. When the water is boiling drop some of the pierogi in the water. When they are floating up to the surface let them boil approximate 1 minute more. Fish them out with a strainer. Top with melted butter and fried bacon and onions (chopped finely). Serve with a salad and some sour cream.

Well it is a long process… but luckily it was worth every minute. The pierogi ended up super thin and didn’t last very long.

There are many different versions on how to make pierogi. Some use sour cream and some use the egg yolk in their dough. My dough was inspired by several recipes but are quite similar to Kate Hopkins version.