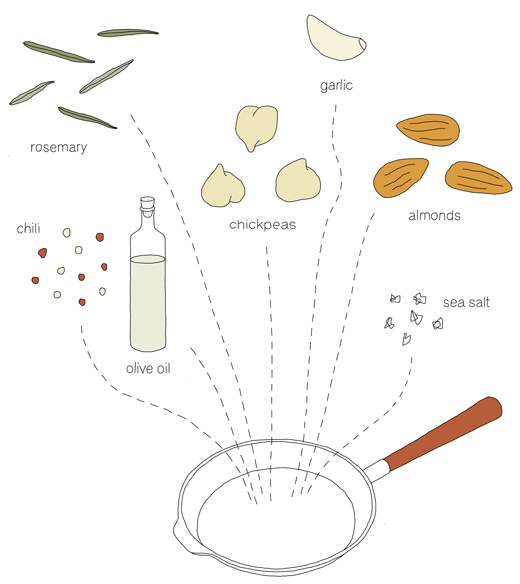 One of my favorite starters is Jules Clancy’s warm chickpea salad with rosemary & garlic. It’s a wonderful dish that is super easy to put together. It always seems to be a welcoming treat for my guests. I serve it warm or cold as a starter together with fresh homemade bread. This dish is also nice together with olives, mushroom confit, feta and thinly sliced dried sausage.

I have tried different variations of this recipe; thyme instead of rosemary and sunflower seeds instead of almonds. They are all good, however the original combination of chickpeas, chili, rosemary and almonds is just perfect so I mostly stick to that. The recipe below is almost identical to Jules, but my method is slightly different. For example, I prefer to add the garlic at the end, as I easily burn the garlic otherwise. And in this way I minimize the risk of bitter and overcooked garlic.

Thanks Jules for this lovely recipe.

In a separate frying pan, heat up some olive oil. When the oil is hot, lower the heat to medium and add the rosemary with a pinch of chili flakes, fry for about a minute before adding the chickpeas. Stir occasionally. Just when the chickpeas start to brown, clear a spot in the pan and add the minced garlic. Let cook for just a little bit before stirring in the rest. Lastly, add the toasted almonds and season with sea salt and some more olive oil (if it feels too dry).

As you may know already, Jules is the creator of Stonesoup where she share recipes and teach minimal healthy cooking. In 2011 she was a guest here on kokblog. I have also done several illustrations for her websites, for e.g. the beets in the header of stonesoup, the yellow bench and header of her Virtual Cookery School.

Can’t get enough of chickpeas? I suggest you check out these links: 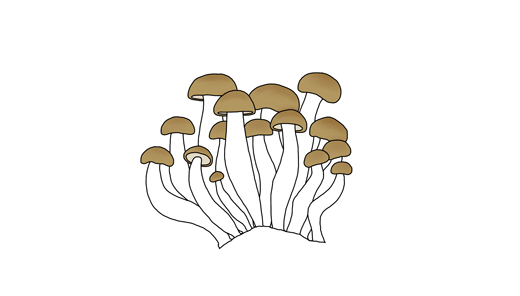 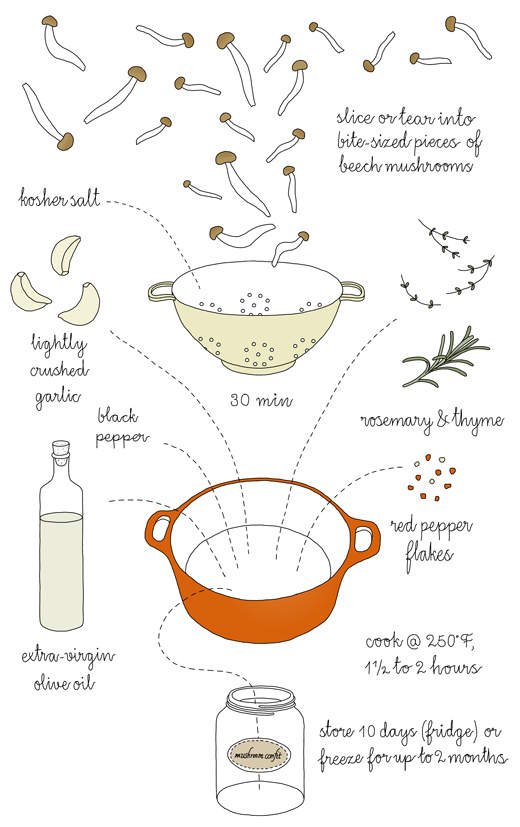 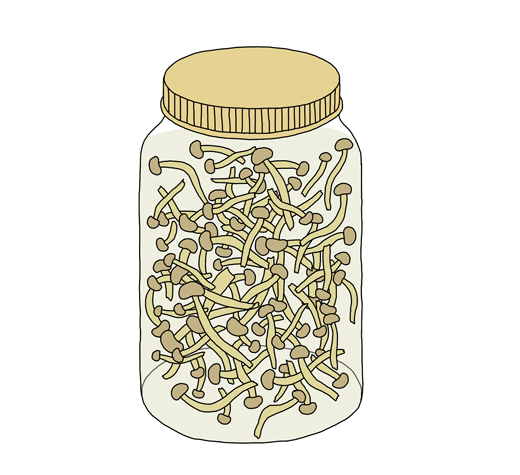 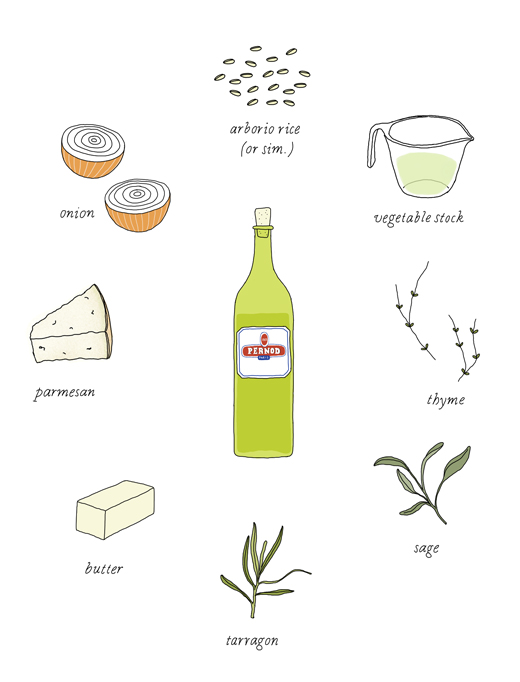 Now, in the beginning of summer, there is not much I can harvest in the garden. But there are a few things like rhubarb, mint, black currant leaves, thyme, sage, oregano, tarragon and parsley etc. The sage and the tarragon are  doing well, so the other day they were successfully used in a simple risotto together with some Pernod that I found in my liquor cabinet. The risotto was served with just an apple and carrot salad, however I can imagine it will work as a side dish with  many other things.

This is pretty much how I put it together: Start by sauteing some chopped onion at low heat with a generous amount of butter until soft and golden in color. Raise the heat and brown the rice for a bit before adding a little Pernod. When it starts to caramelize pour in enough vegetable stock (homemade) to cover the rice. Add fresh sage and thyme. Stir and feed with more stock whenever you need to until the rice is tender but still a little al dente. The risotto should feel thick and creamy. Add a lump of butter and freshly grated Parmesan. Stir carefully. Remove from heat and let the risotto rest covered for a couple of minutes. Decorate with fresh tarragon before serving.

Later on I will have lettuce, mustard greens, kale, spinach,beans, zucchini, carrots, beets, coriander, dill, strawberries, raspberries, gooseberries, elderflower, black & red currants and many other things in my garden. Down the road there will be wild apples and black cherries. But until then I’m pleased with what I have already.

A couple of weeks ago David Frenkiel and Luise Vindahl at Green Kitchen Stories asked me to illustrate a recipe for them. As I always enjoy visiting their site the answer was easy. The recipe is a beautiful Yellow Beet Salad with green lentils, sheep cheese, pea sprouts and apricots. The salad has a simple mustard dressing flavored with poppy seeds. I’m already in love with the combination of beets, lentils and sheep cheese. But with the addition of pea shoots, apricots and poppy seeds this dish becomes much richer in flavor and texture. Very inspiring! Read the whole article and get the recipe here.

David and Luise lives in Stockholm, Sweden together with their daughter Elsa. This Spring (in April) their first book, The Green Kitchen will be released in both UK, Australia and US. In the US the book will have the name Vegetarian Every Day. The recipes in the book (and the recipes on their website) are all creations of their own everyday vegetarian cooking.

Some of my favorites from their sites are their Lemon & Coconut Bars and this Spinach Kale Soup with Tahini Dressed Chickpeas. 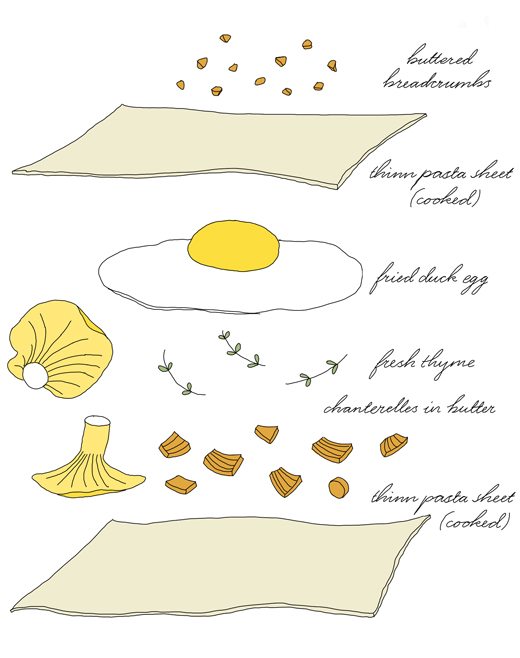 This Autumn I finally got everything right and managed to sit down and eat at Vinegar Hill House. I loved that place long before I had ever set foot there. Why? Its the whole setting. Even if the Vinegar Hill neighborhood is well known it feels like a hidden treasure that can be easily missed if you don’t know where it is. It makes me feel like I have found something for the first time even if I haven’t.

On my first visit at Vinegar Hill House one of the dishes was Duck Egg Raviolo with chantarelles. I learned later that Raviolo is singular for ravioli. I also came across the amusing dish Uova da Raviolo, which is a raviolo that holds a whole egg yolk inside. I’m impressed as that is probably something my shaky hands can’t do.

The raviolo at Vinegar Hill House was nothing like the above. The filling, chanterelles and a fried duck egg had been cooked separately from the pasta and put together in layers as in the illustrated diagram above. The dish was topped with buttered bread crumbs. The duck egg was perfectly cooked with a white just set and a gorgeous looking egg yolk that burst when I poked my fork into it. The runny yolk blended well with the butter-rich chanterelles. I think this dish was wonderful. I could easily have it again and again, as a main course, for lunch or brunch.