Five years ago, Anna Brones and I released our book Fika: The Art of the Swedish Coffee Break. In honor of our 5th “book birthday,” we decided to put together a zine devoted to the basics of fika.

Maybe you have our book on your shelf, maybe you’re a fika aficionado, or maybe you’re entirely new to fika, the Swedish coffee break. Regardless of what your fika background is, we made this zine so that you can easily print it at home, color it in, and add your own drawings. There’s a recipe for chokladbollar, Swedish chocolate balls, too. We wouldn’t want you to go without a fika treat.

In this time when a lot of us are at home and socially distancing, fika seems like a good ritual to remind ourselves to take a little break from the onslaught of news, and find a little space to just be present.


Make a plan for a virtual fika
Fika is often a social affair, but you can fika and still practice social distancing. Why not use this as an excuse to call a friend and have a virtual fika?

Make “stay home and fika” your new mantra—click here to download and print the How to Fika zine. If you’ve never made a one-page zine before, it involves a little cutting and folding. Here’s a video that breaks down the process.


Please share your fika moment with us by tagging

Selection of Fika treats on kokblog 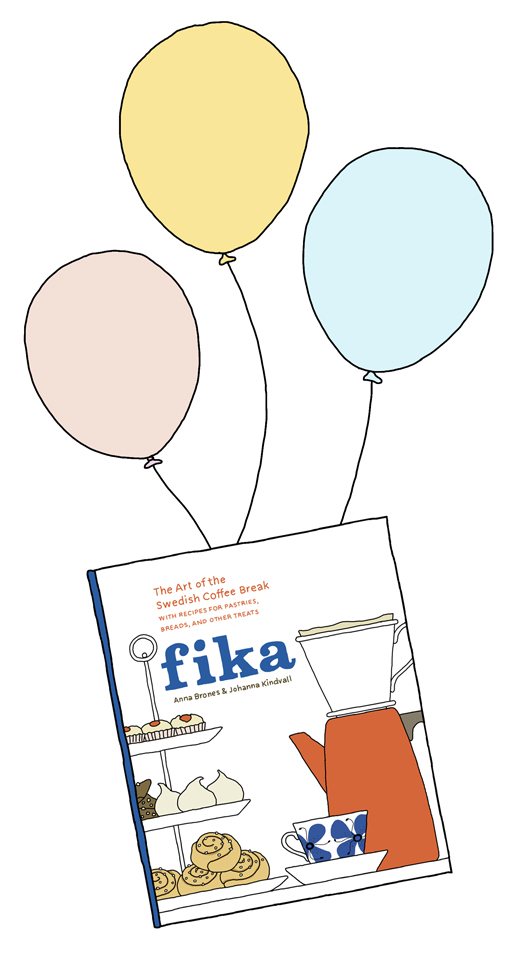 One year ago, today, Anna Brones and my book Fika – The Art of The Swedish Coffee Break was released. I can’t believe how quickly this year has gone by. A year full of wonderful meetings with readers and enthusiastic bakers and cooks from all over the world.

By tagging #ArtofFika on social media we have been able to follow our reader’s wonderful fika moments and their delicious results when baking cakes, cookies and breads from the book. I also find it inspiring when I see readers creating delicious new versions of the recipes. Thank you all for sharing your fika with us.

I’m super thrilled to let you know that the Fika book is being translated into both Chinese and Korean. How cool is that? I can’t wait to see the result.

To celebrate, I’m baking a tweaked version of the Meringue Torte (page 104), which for some unknown reason in Sweden is called Pinocchiotårta or Brittatårta. In the cookbook we just calls it Marängtårta and bake it with hazelnuts and chocolate.  Here below I suggest baking it with berries (fresh or frozen) such as strawberries, blueberries or/and raspberries. I also like it with a little fresh ginger in the merengue and instead of hazelnuts topped with slivered blanched almonds. 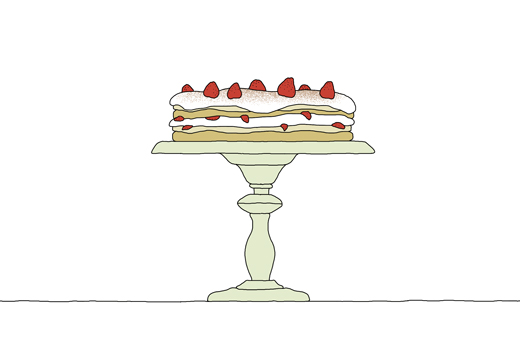 filling (and topping)
1 to 1½ cup (240 to 360 milliliters) heavy whipping cream
about 1 cup fresh (or frozen) berries (blueberries, raspberries or strawberries)

for the torte
Cream together the butter with sugar. Add one egg yolk at a time. When it’s evenly blended, mix in the vanilla and milk. Lastly fold in the flour and baking powder with a spatula until you have a smooth batter.

Spread the batter equally into the 2 prepared springforms.  It should be spread as a thin even layer all the way to the edges.

for the meringue
In a grease free metal or glass bowl, whisk the egg whites until soft peaks form. Continue whisking while adding sugar little by little and whisk until stiff peaks form. Lastly add the fresh grated ginger.

Divide the meringue equally between the two pans and spread out so it covers the cake batter completely. Sprinkle with slivered blanched almonds on top.

Bake the cakes for about 40 minutes, until the meringue and almonds are crispy and golden brown. Remove from the oven and let cool.

When the cakes are cool, carefully remove the cakes from the springform.

assemble the torte
On a serving plate, place one layer and spread the berries and whipped cream on top. Place the second cake layer on top and (if you like) top the cake with more cream and decorate with some extra berries.

*You can also bake this in a single rectangular pan lined with parchment paper, and cut in half to make the individual layers.

Fika: The Art of the Swedish Coffee Break (Behind the Scenes)
and here you can see Anna Brones behind the scenes story

Scandi food: why Swedes do midsummer and coffee breaks best
by Diana Henry

Images from my book release party 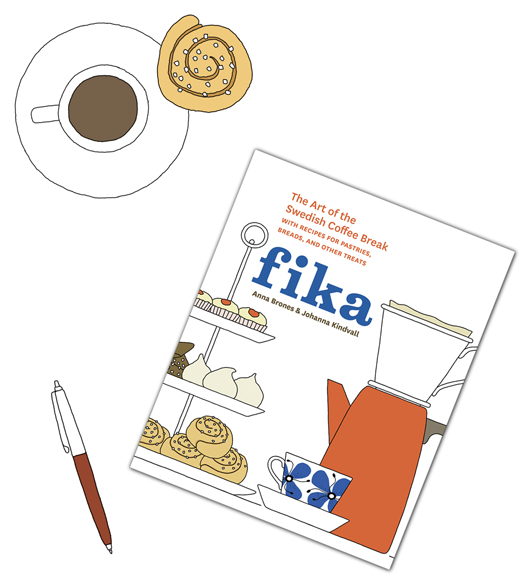 Do you want to fika with me?
Next week we are celebrating by having some Fika – The Art of the Swedish Coffee Break events here in NYC, at various cool places around town.
Both Anna and I will be there! I’m very excited!
Not in NYC? There is also an opportunity to meet Anna on the west coast later in May or meet up with me in London at the beginning of June.

Hope to see you all over a fika!

Book signing at Fika NYC on Monday May 4, at 3 to 5pm
Join us for a chat while having fika. Psst! I have heard there will be chocolate balls!
Address: Fika Tower’s Loft  – 824 10th Avenue btw 54 and 55 th Street

Book signing at the Nordic coffee shop Budin on Wednesday May 6, at 5 to 7pm
Join us over a chat while having some Scandinavian Drop Coffee with your fika.
Budin also has a great beer selection!
Address: 114 Greenpoint Avenue, Brooklyn

Book signing at the bar of 61 Local on Thursday May 7, btw 6 – 8 pm
Join us for some fika talk over a beer and cardamom buns (made from our recipe)!
This bar has a great selection of crafted beers.
Address: 61 Bergen Street, Brooklyn

Anna will continue to…

And Johanna will go to…

Book signing at Fika London on June 3, at 5-7pm
Come chat with me while having fika. Pssst they have kladdkaka (chocolate sticky cake), Swedish Pancakes  and  Cinnamon Buns. And more!
Address: 161 Brick Lane, London

Hope to see you all!

You can read more about the book here. 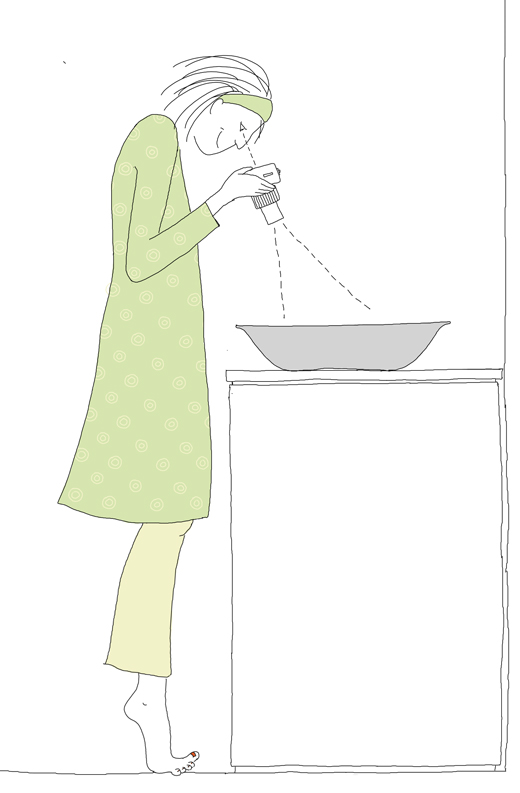 Story by Anna Brones • Illustration by Johanna Kindvall • Recipe by both

Put two Swedes who love to cook in a kitchen together and there will be an immediate discussion of what baked good needs to be concocted for afternoon coffee. After all, we don’t mess around with our coffee breaks, and a serious coffee break deserves a serious pastry. So we settled on mazariner.

Mazariner are the darling of Swedish cafes, a balance of buttery pastry and almond filling topped with a thin layer of icing; the type of thing you bite into and wonder where this food has been all of your life. They’re just fancy enough that you don’t keep them on hand at all times, but you don’t have to put them on a serving tray.

Made in small oval tart tins, they can seem daunting to make, but as it turns out, are easy enough that you don’t need to cruise to your local IKEA to track down the mass produced version – although they do have them if you’re in a Swedish food pinch.

Our recipe search started with a few Swedish cookbooks and a call to my mother who was immediately reciting the ingredients from a page she had ripped out of a Swedish magazine sometime in the late 80s – when you come across a good recipe, you hold on to it. Johanna, being a more skilled pastry “chef” than myself did a creative combination of the many versions, and we both decided that plain icing just wouldn’t suffice. Add a little orange juice and you have a real masterpiece.

Make a batch of these, brew a French press and it will almost be like you’re sitting at a cafe in Stockholm. Almost. 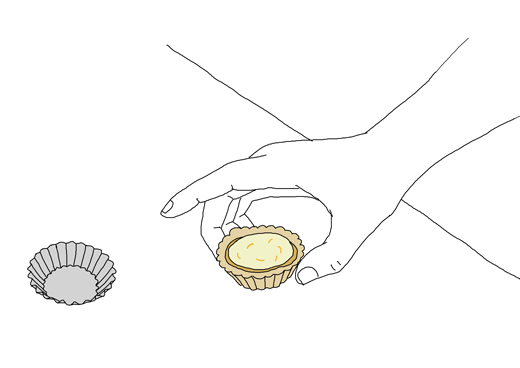 filling
one cup blanched, ground almonds (can be replaced with almond meal)
2 bitter almonds (about 1 teaspoon almond extract, or more depending on how strong you want the taste)
2.5 oz butter
½ cup sucanat or organic cane sugar
3 small eggs

In a large wide bowl cream together butter, egg and sugar. With your hands, mix in flour – this can be done either in the bowl or directly on a clean counter top. Crush the cardamom with a mortar and pestle as fine as you wish. If you don’t have a mortar or grinder, you can use pre-ground cardamom. Add it to the dough and blend well. Let the dough rest in a cool place for at least 30 minutes.

While the pastry dough rests, blanch the almonds by pouring boiling hot water over them and letting soak for a few minutes. They are ready when the skin slips off easily. Skin all of the almonds and grind them into a fine meal in a food processor. In a small saucepan, melt the butter and set aside to cool. Whisk the eggs together with sugar to a porous batter and add in almonds, almond extract (if you didn’t use bitter almonds) and butter. Stir together until well blended.
Grease small tartlet tins* (see illustration above) with butter. Line the molds with a thin layer of dough (about 1/8”) and fill them almost to the top with the almond mixture. If there is any leftover dough you can freeze it and use it some other time.
Bake in the oven at 400°F for about 15 minutes. The cakes should have got a slightly brown color on top. Let them cool a little before removing the cakes from the mold.

While the mazariner bake, prepare the icing. In a small bowl add the confectioner’s sugar and drip in some orange juice. The icing should be a little thick but still easy to drizzle over the mazariner. Wait until the mazariner have cooled before icing them.

Serve the mazariner for an afternoon tea or coffee break, you’re sure to make some new friends if you pull these out.

*If you don’t have small single cake molds as described you can use mini muffin trays or similar forms. In Sweden, disposable aluminum forms are often used, but stay away from single-use containers and do the best with what you have. We always encourage creativity! 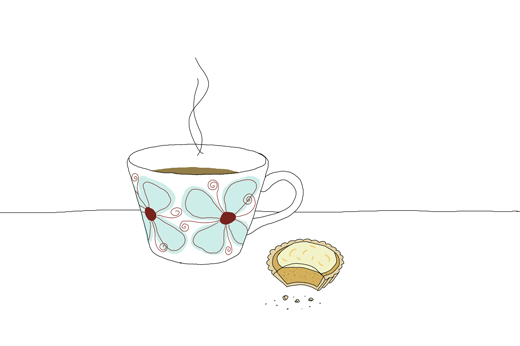 This article was originally published at EcoSalon, 15 May 2012